When I grow up

There was this funny game that we played at my bridal shower, lo those many years ago. The hostess, Miranda, called Eric up before hand and asked him a series of questions about us as individuals and as a couple. The point of the game was, I think, to show us that even after living together for eight years we didn’t know each other at all, and therefore we had no business getting married.

Or, maybe it was just for fun.

Anyway, one of the questions she asked was, “ What has Kate always wanted to be?”

The correct answer, and the one I gave, was, “A writer.”

I was thinking about this recently because Emily has started school (I know, I know, it is just one half day a week, but still) and I was trying to imagine what I would do as a job once the kids were both in school. Eric is pretty nice about the not holding down a job thing now, but I bet once there are no kids at home all day he’ll be expecting me to contribute a little. Between my little and odd experience and the small town, the choices are a bit limited.

But then, a year or so ago a friend of mine published a book, and I don’t mean that she printed it out at Kinko’s, nor did she even do some self-publishing thing on the Internet. She really published a real book. And there were reviews and reading tours and all sorts of writer-like things.

I would religiously follow her blog and think, “Aw man, now she’s reading in New York City and drinking at artsy bars and all with her baby in tow. Why can’t I be reading and drinking and artsy?” There were all the drawn out details of all it took to be her. She was constantly posting reviews and reading schedules and letters she’d received, and it all seemed like a little much for me.

And so, the problem, I think, is twofold. It’s true that to actually be a writer I would have to be smarter than I am, a far better writer than I am, more interesting than I am and um… actually having something to say might be good too. Oh, and spelling and grammar might help.

But, it is clear from her blog that I would also have to be driven and self-promoting, two of the many things I am not, things, in fact, I could never do. So, maybe the fact that I’ll never be a writer really is beyond my control. But, I am not without options.

Does anyone know if James Taylor is available? 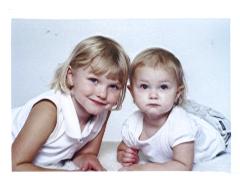 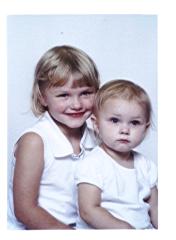 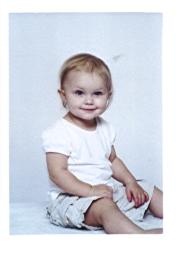 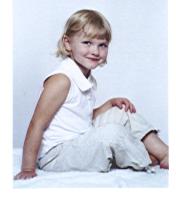 When is it not time to have pictures taken? It seems like between the two girls I’m suppose to have them taken about every two weeks.

These aren’t even great pictures and yet I still bought a car full of them which means that you can either:
A) contact me to get your very own copy or
B) create any crappy image of Girl 1 and/or Girl 2 and offer to sell it to me. 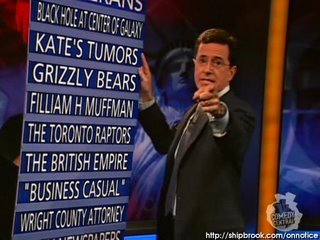 The best part about having tumors is the outpouring of kindness from everyone. Sometimes it comes in strange, irreverent ways, and those are the ones I like best.

Thanks to Dean and Cynthia for this. I had it printed out and stuck on my fridge for more than a week before I saw the Wright County Attorney entry. How self-centered am I? I didn’t even see Eric there.

For those who don’t know this is Stephen Colbert of The Colbert Report (Comedy Central) and his On Notice board. If you don’t partake already, I highly recommend the nightly cocktail of The Daily Show and The Colbert Report. Trust me, you won’t even miss the pseudo-news, “new life-saving information, report at ten”, this isn’t news it’s a commercial crap that is the local ten o’clock news, although you will be scared to death at the complete apocalyptic nightmare the world is in at any given time. But it’s funny, really funny. I’m not sure how that works, but it does.

An open letter to Mrs. Sifert 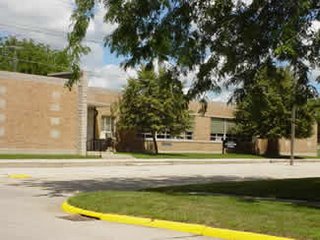 Monday is registration day in Belmond and, among other things, we are going to be giving Emily’s teacher a card.

Am I a little crazy? Oh yes!

But I encourage all parents to offer your help to your children’s teachers. Maybe you will be a little less over-the-top, but lend a hand if you can.

I wanted to take a minute to introduce myself. Sure you think that you know me. You see me around town with the girls. But you should also know: I am one of those mothers.

Emily is, of course, one of the most important people in my life and I want the best for her. That doesn’t mean that I think that she is perfect or that she can do no wrong. But it means that I want her to have the tools and opportunities that can make her into a kind and happy adult. If she turns out to be the class bully (God forbid) I want to know.

You are her introduction into the world of education and I am thrilled. I couldn’t have asked for a more kind and generous, fair and just person to usher her into the sometimes overwhelming world of… okay, okay, I know, it’s only three-year-old preschool.

What I am trying to say is this: you mean the world to me. We are neighbors in this small community and you are going to be the first person that my daughter spends much time with, aside from family. If I can make this year easier for you in anyway, just let me know. I’d like to think that I am the very definition of an enthusiastic and helpful parent.

Well, I can’t actually paint, but Eric can, and I can get him to the school.

I have also enclosed a gift card to Target to help with any extras you might need for the classroom, or for whatever. Maybe what you need is some chocolate for yourself. Believe me, I understand and I am happy to provide it for you. Eric and I feel very lucky to be able to meet the needs of our children and we would be more than happy to help out throughout the year if there is anything you need (supplies, pictures of the children developed, more chocolate.) Just let me know.

Emily and I are looking forward to the school year. Thank you for everything… and consider yourself warned.

No news is good news…

…but when your neurosurgeon calls you back right away, that is bad news.

The results of the MRI came in this week and they were um… not great. We were concerned about two spots in the thoracic area from the April scan and it turned out that the concern was valid: two tumors were found between my shoulder blades. The scan also showed three tumors very low in the sacral area.

For those who are keeping score, that is a total of five tumors.

There was more odd news in that the doctor said that it wasn’t the tumors causing my symptoms. I have another, unrelated, degenerative spinal disease that is causing problems.

I’ll write more about this and what it all means later. Right now I am just sick of thinking about it.

There is some good news at least: all the Simonson cars are up and running again, so we’ve go that going for us, which is nice.