Christmas in July? Halloween in December.

Because it is almost Christmas I thought it was about time to post the girls Halloween photo. That’s just the kind of mom I am. 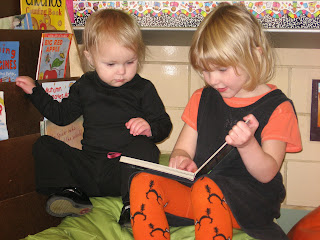 Here they are at Emily’s preschool party. Emily was a witch, although it’s clear she isn’t wearing her hat, and Claudia was a little black cat, although she is sans ears here.

Okay, so more than a year ago I told Eric that I longed to be a writer and I asked him what I could do to become one. Brain surgery, perhaps? He came up with the brilliant idea that I could… wait for it… actually put words on paper, or computer screen, as it were.

And so I did. I have spent the last few months writing here and on simonsongirls.blogspot.com about absolutely nothing and having a grand time of it.

And since Eric is my Mr. Miyagi I went to him again recently saying that I was sick of waxing the car over and over and still not feeling any closer to actual writing. He suggested that I send something I have written to someone other than my closest friends. Imagine that!

And so, I found a little fiction contest and sat down and whipped this up for it. I don’t actually write fiction, well, I don’t actually write at all, but I was able to cobble this together with a little help from something I posted earlier. I don’t really care if I win, (although it would be nice not to be the biggest loser) it really was just fun to see if I could put something together on a deadline. Turns out I finally got it sent off only because time was up.

Thanks to those of you who endured endless emails and readings of this while I was working on it.

Because I Said So: A Love Story

It’s Thursday and the Midwest sky has opened up in sheets of rain: a perfect day for lunch out. As a stay-at-home mother I find myself turning to more and more of these outings, desperate for evidence of life beyond our four walls and for adult interaction, even if it is just to order grilled cheese and grape juice for my daughter and a Reuben and coffee for me. Eloise, my “mostly companion,” is four with a name culled from children’s literature.

I love my child with a fierce, all-encompassing love that causes me to do things like co-sleep with her for three years, a move that almost drove my husband mad. It also makes me do things like decide to leave my job as a graphic designer and stay home full-time.

Living with a child, especially a bright, interested, curious child like Eloise, is like living with a debate team twenty-four hours a day. Everything you think, everything you say, is questioned. Your authority on every subject doubted. There is little that she believes you are an expert on and after awhile you become both defensive and a little nervous that she is right.

We find a free couch at the coffee shop and sit down. “Hold on to your juice,” I say for what may very well be the one-millionth time in Eloise’s short lifetime.

She looks at me, waiting. I search my head–stumbling over all the sleepless nights and the piles of dirty laundry my brain has turned into these last four years–for what she could be waiting for. “Please,” I say finally.

She accepts this and goes back to munching on her sandwich. She stops again, looking at me, the wheels turning. “Why?”

Two years ago, when Eloise was two we were oblivious to the power of endless “whys.”

People cry about the evils of the so-called “terrible twos” in nearly every parenting book ever written, and perhaps for some people there is such a thing. In our house, this was not the case.

Instead, we sailed through the “twos” with nary a whimper. Sure there were times when Eloise was grumpy or a bit stubborn, but it was nothing we couldn’t handle, nothing that gave us any cause for alarm. We thought ourselves not just safe, but above such things. It seemed then that we had somehow earned this with our superior parenting and fine luck.

It seems sad to think that behavior could peak at two years of age, but the “twos” departed and in their absence the “Oh my god, what have we done to deserve this? threes” descended. Last October, clearly as one sign of the coming apocalypse, Eloise embraced her new role as the world’s most contrary child. She didn’t just push the envelope or test her boundaries; she made it clear that she looked at me with nothing but pure teenage disdain.

While I was not a believer in karma or reincarnation I was beginning to run out of reasonable answers to the question of what I had done to deserve this. I read to her. I told her that I loved her a hundred times a day. I tried to look at the world through her eyes. I was fine with the idea that somewhere down the road, in twelve years or so, we might have a fight or two or even that Eloise would get that too-cool-for-this-family thing that I absolutely hate on teenagers, but this had been far worse, and far earlier than I imagined.

Now, at four, Eloise moves effortlessly between the irrational rage of her three-year-old self and a new, painstakingly precise cataloging of “whys.” The funny thing is, I expected the whys. I just imagined I’d handle them better. I thought that I would answer them patiently and even in-depth. There wouldn’t be a single “because I told you so” from me.

When it comes to motherhood, some days feel like one long, un-winnable battle. And if you did win, then what? The payoffs of a motherhood well fought and rightly won may be years away, or might never come at all. But, sometimes you see a glimmer of the future, of who you have made this tiny person become, and it’s enough.

“But the juice is purple.” She pauses.

“And the couch is purple.” Another pause.

“It wouldn’t leave a stain.” She stops, looks at me, and I see that she is giving me time to adjust to her theory so my brain isn’t completely blown away.

But for a minute it is blown away, just a little. My eyes fall to the dark velvet couch of the coffee shop and I think back to trees falling in empty woods. If the color the juice leaves behind is hidden so totally in the fabric of the couch, then is it a stain? Did she plan this out like a champion chess player, moves ahead of me? She must have known my answer about the stain. She must have known it and questioned it. Worse… does she have a point? Well, yes and no.

And that’s how it is with Eloise. She is sweet and bright and inquisitive, all wonderful qualities in an adult… or someone else’s child. We all hope for smart children but what we don’t realize in our moment of wishing is that the smarter your child, the dumber it makes you feel. It isn’t enough to just say no, or even no with a single piece of evidence. In this new world, absolutely every possible outcome must be warned against. Don’t hit your sister. Don’t poke your sister. Don’t make your sister hit herself with her own hand.

And there it is.

Because I said so.