Getting their requests in early 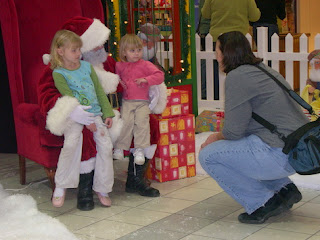 This is a picture the the Ft. Dodge paper put on their website after the girls and I were caught visiting Santa on Friday. If there is a less attractive position for a very pregnant woman to be in than squatting down, I can’t imagine what it is.

Here Santa is asking the girls what they would like for Christmas and I am translating from very quiet, shy girl speak into English. The two girls ahead of us in line had each written a book, the heft of which would rival War and Peace, of their wish lists. My girls are much less greedy. One thing makes them as happy as a hundred.

When Santa asked Emily what she wanted she said a fish, that’s it, nothing else. “Really?” Santa inquired, “Nothing else?” she said, “Mmm, maybe a tank for the fish.” (Hear that Dean and Cynthia?)

Next Santa asked Claudia what she wanted. She answered, eyeing the box of candy canes that Santa gives to all the children that come to see him, and said that she wanted a candy cane. “Anything else?” asked Santa. No, that was pretty much all she wanted.

Here are the girls on Santa’s lap. Clearly they are thrilled.

Turns out the kids are drunks

Last week the kids and I tagged along with Eric while he was out of town at a County Attorney’s conference. In our family this is what passes for a vacation. In fact, the girls have never been on a “vacation” that didn’t involve Eric being gone during the day for training and the attendance of the state Attorney General.

Anyway, while out to dinner one night with Eric’s assistant, a woman in her 20’s who is expecting her first child in the spring, Eric and I tried to pass along the thimble full of knowledge that these five years of parenting have taught us.

In our defense, when we issued the invitation we warned her that it was too late for her, that she was already pregnant, had announced it to the world, and maybe she would like to stay home instead of eat out with us. After all, she was bound to see things at dinner with our two girls (who had been stuck in a hotel room for four days) that would make her rethink her decision to bring a child into her life. She laughed (fool!) and bravely ventured out with us, her only comfort the lie that every scared pregnant woman tells herself when faced with other people’s children, “Well, my kids won’t be like that.”

At dinner Eric told her something that, at the time, just seemed funny, but now, with a couple of days to mull it over, has become life changing to me. Eric told her that living with children was like living with a house full of drunk people: they run into things, fall over for no obvious reason, there is vomit and other bodily fluids to clean up, one minute they are laughing hysterically at nothing, the next minute they are sobbing over an imagined slight, then, another moment later they are going on and on about how much they love you.

And my god, he is right: that is what it is like to live with children! In fact, as if to punctuate his theory, Claudia ended the evening in the restaurant lobby having such diarrhea that it spilled through her pants and down Eric’s shirt (something I swear that hasn’t happened since she was an infant more than two years ago.) Who, other than drunks and children, defecate on themselves (and others) in public?

And here’s the thing, my kids are pretty good kids… but they’re still kids. They don’t start fires or shout obscenities. They almost never break things and they, more often than not, remember to say please and thank you. But, that said, even on good days they still act a lot like drunken adults. And while this isn’t the kind of knowledge that is going to change the rest of the world it has made things a little better for me. Somehow I feel less guilty that I do not blissfully love every minute of my life.

Because, honestly, there is a lot of the day that just sucks. I look at all of the people in our lives that are having trouble conceiving and I feel like I am so lucky to have been able to have two healthy children (and counting) without much trouble that I should be thankful for every moment, but it doesn’t work that way. In fact, for me even a near death experience didn’t give me that “every moment is precious” feeling for very long. But now I think: What other frat housemother loves every minute of it?

Yes, I adore my kids, but I do not adore the things that fill our day. Even if, after five years, wiping bottoms and dealing with breakdowns doesn’t faze me, they still aren’t my favorite part of the day, and I guess that’s okay because I maybe these actions are just unlovable. Maybe it’s okay to take my good fortune for granted. No infertile couple out there is going to get pregnant just because I pretended that I love every minute of this. Eric’s assistant isn’t going to buy that it’s a barrel of laughs every moment, even if I lied and told her it was.

And one day my kids will have their own kids and they will probably find parenthood a walk in the park. I can just imagine them turning to one another and marveling at just what a whiner I was. They will get no unrealistic expectations for themselves from me. Here we are just taking each day as it comes and doing the best we can.
And I guess that’s okay because, also like a bunch of drunk people, the girls are unlikely to remember much of the daily goings on here. 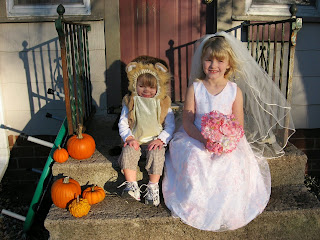 Ahh, Halloween! Here Claudia (as a Lion) and Emily (as a bride) sit just before heading off to trick-or-treat on Wednesday.

Although we did have a big, uncarved pumpkin on our front step you cannot see it in this photo as someone took it earlier in the week. We have decided that it was a poor child that could not afford a pumpkin of his or her own and not a total jerk that was just trying to be mean. Somehow roving bands of poor pumpkin less children make us feel better about our loss.

There was a smashed pumpkin in the street around the block from our house. Luckily, it was a pumpkin that had clearly been carved and so, although there was a great sadness about the destroyed pumpkin, the girls didn’t seem to suspect that it may have been our beloved, still missing pumpkin splatted there in the street. The girls were obsessed for two days by the pumpkin roadkill, begging me to drive that way home any time we were out. They would crane their necks to look out the windows while pleading, “Drive slower! Please slow down so we can see it!” Then, once they had worked up the courage, the three of us walked over to see it up close and that seemed to give them the closure they needed.

Also, in general, we do not have a mini trampoline sitting against our front steps but we are in the process of fall cleaning and everything is being cleaned and stored (or at least moved somewhere else) and this trampoline was on it’s way to the garage for the winter. From out of the mouths of super hereos

At Emily’s Halloween party on Wednesday another mother and I were approached by a little boy in a Spiderman costume that was quilted in such a way as to make him look muscular.

We smiled our little room mother smiles and then he looked up at us and asked, “I really like being Spiderman and all, but why do I have these big boobs?”